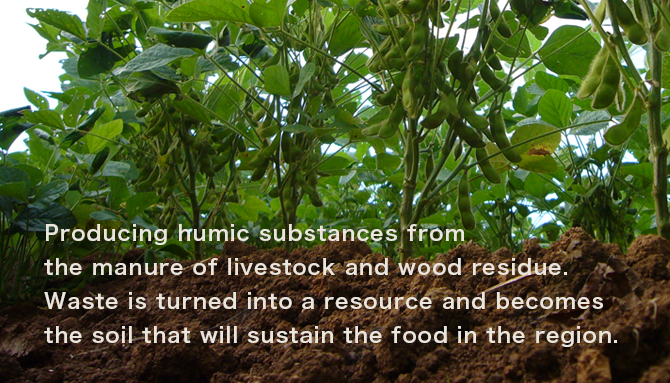 Using humic substances to convert the soil into having a more suitable organic structure for plant growth.

“Though farmers are in contact with soil almost every day, they don’t really know ‘what the soil is.’ Farmers who are eager to improve their soils also depend on their fine-tuned intuition. Even if you try something, you have to wait to review the whole year’s cycle to see the results. It’s long-term work,” said Mr. Hajime Soma, the representative of Gassan Pilot Farm, which runs organic farms in the city of Tsuruoka.
At present Mr. Soma is trying to change the structure of the soil by using “humic substances” involving a special method. “We are preparing an environment where plants and crops are easy to grow by modifying the soil, which works well on both retaining and discharging water, nitrogen, phosphoric acid and potassium. Naturally, the soil of Japan strongly binds its nutrients, thus it does not release them well. Phosphoric acid isn’t particularly absorbed well by crops.” Therefore, Mr. Soma adopted a certain apparatus that allows for sufficient fermentation of livestock manure and woody fiber in making humified organic matter. Thereby, the acid is increased more than normal, and the organic substance is easily decomposed by microorganisms. Then, the humus is mixed into the soil at the time the substance is chelated. As a result, the humified organic matter becomes the nucleus and creates a greater structure in the soil.

“Chelation” means “the scissors of the crab” in Greek. Chelation is that which lets a metal ion form into a “nipping” structure by the transformation of a metal ion into a structure with various nutrients by the action of the acid. “With the method I am adopting, microorganisms are increased, the ratio of fermentation increases dramatically, and chelation progresses. Rich nutrients create chemical compounds with other components in the ground, but it is hard for them to remain in the ground. Thus, it is easy for the plants to absorb the nutrients.” Through this process of fermentation, compost, which is usually only about 60 celsius, rises to a temperature close to 80 celsius, and germs die out.

Mr. Soma mixes this “special humus” to 8㎥ (8,000 liters) per 10 ares (1000㎡) as a guide, and cultivates several crops with it. “First of all, the germination rate rises. The growth speed is accelerated for all crops, and the bearing and size of the crops are increased. The tastes also get better. However, there are crops in which it is suitable and others not. For example, with edamame, because the growth speed is faster, sugar escapes easily if you misjudge the timing. It is also hard to pull out, as the roots stretch out widely.” It has been 3 years since Mr. Soma started making this humus. He says that trial and error still needs to be continued in order to create the humified organic matter which results in the desired ability.