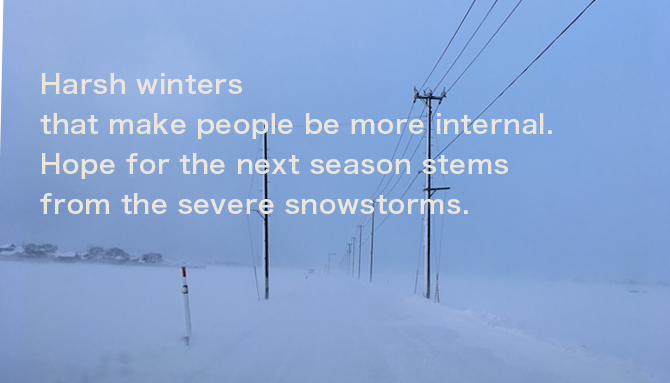 Shonai Life Village Report has thus far been reporting about the land and the people of Shonai through water. In this 6th episode, “The Winter of Shonai,” the most severe season in the region is featured. Freezing cold wind, the snow being blown upwards by the wind… but though it is full of harsh weather events and hardships, the season is just the thing that results in producing the meltwater, which in time fertilizes our fields. Let’s get started with stories focusing on the soul of Shonai people dealing with this harsh season.

Winter, where heavy snow covers up the whole town and drifts all about.

Even with the constant falling of snow, it also blows upwards, never touching the ground, aggressively flying through the air. A fierce storm makes trees lean from the wind. Fallen snow tends to be thought of as a problem, but in the Shonai region, it is instead the wind that is the real threat. Because of strong winds from the Sea of Japan, the apparent temperature feels much colder than the actual temperature. A local individual describes the freezing wind as ‘bone-chilling’. “It doesn’t matter how much I wear: thick socks, tights underneath the trousers, boots, etc. Nah, cold is cold.”

With the combination of snow and wind, snowdrifts can be a serious obstacle for local drivers. The snowdrifts not only block traffic lanes, they also reduce the width of roads in the rice field areas, making them go out of sight. One can barely see even several meters ahead, perhaps causing slipping by heavy braking, or steering uncontrollably. “I see overturned vehicles in rice fields almost every day. The drifting snow frightens everyone, including people from other snowy regions. I am also terrified by driving at night.”

A longtime favorite popular song, called, “Yuki no Furu Machi wo” (The Town where Snow Falls), was composed by the songwriter, Yoshinao Nakada, who was inspired by the snowscape of the city of Tsuruoka. In a park in Tsuruoka, there is a monument to the song, where the beautiful melody can be heard. The melody is expressed by its slow tempo, but the real winds and snowfall are strong and heavy, sometimes raging. In Sakata, a neighboring city of Tsuruoka, even in the plain, they had a heavy snow accumulation of over 370cm just a few years ago. Neither flight cancellations nor the suspension of train operations are rare.

“I heard that in Shonai, the number of people feeling depressed increases in wintertime,” the man said. “On the other hand, the winter is also the season when people have more time to sit and have long talks with their family. In this region, the winter allows people to be more internal.” The winter, whether one wants to or not, keeps people inside. Perhaps, then, the people of Shonai may not seem to welcome the winter, and just wait for the season to pass. But looking inward, or back to the past, even mapping out the future… these might be deeply related to the nature and climate of Shonai.