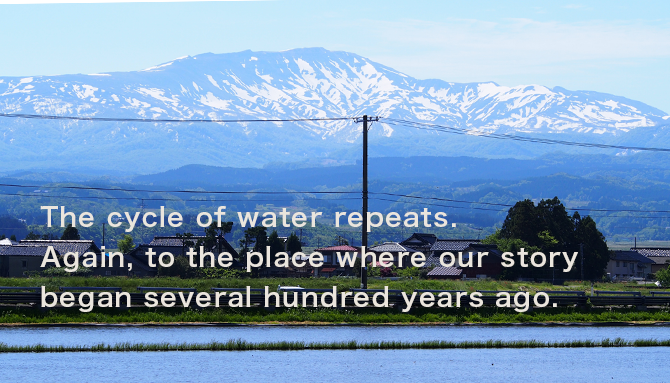 Up to now, our Shonai Life Village Report has reported about the land and the people of Shonai six times. In focusing on water blessed by nature, we’ve gazed into the Shonai region from different perspectives, such as agriculture, fisheries, people’s beliefs and affections. In this final episode about water, once again we come back to Shonai in spring, the season where it all begins, and think about the repeating water cycle. Water… where from, and where to? Indeed, the year-long trip of water has finally concluded.

Spring. Rice planting, the main event of the season where it all begins.

Spring. The snow that was covering the plains during the long winter begins to melt, footpaths that have turned green look like belts splitting rice fields, running horizontally. There are many rice fields where water has not yet been drawn into them, thus at a glance, some of them look like regular farm fields. On the other hand, there are also rice fields just in the process of being planted. Also, people driving tractors and carrying seedlings can be seen. The season of planting in this area is from the beginning of May to the middle of the month.

Spring for the rice farmers of Shonai is the season not only to germinate seedlings into healthy rice sprouts, but also to adjust the condition of the soil. “Taokoshi”, the digging up of and restoration of the soil in rice fields, which have slept for the winter. “Shirokaki”, the filling up of the field with water until the soil becomes muddy, making it flatter. When these processes have finished, then the farmers finally can begin to plant rice.

In preparing for the rice planting event, the previous day Mr. Hiroshi Itagaki, from Dewashonaitokusan, LLC, whom we have heard from several times in past reports, brought from his rice nursery beds the seedlings to be planted, which have grown to around 15cm. There are participants from not only the Shonai area, but also from Tokyo. As with the autumn harvest, this event is bustling with many people.

“Chirp. Chirp.” I hear a bird singing from somewhere, and see snowpack on the mountains off in the distance. A wall of cold winter wind can occasionally be felt. However, the expressions of those who came to the rice planting event is equally bright. The act of planting life on the Earth wraps people in indescribable elation. Many participants brought their children, and the younger ones are running around everywhere, even before the rice planting starts. Noticing our footsteps, a green frog jumps into the irrigation canal. Spring would seem to be the season that brightens up the creatures too.