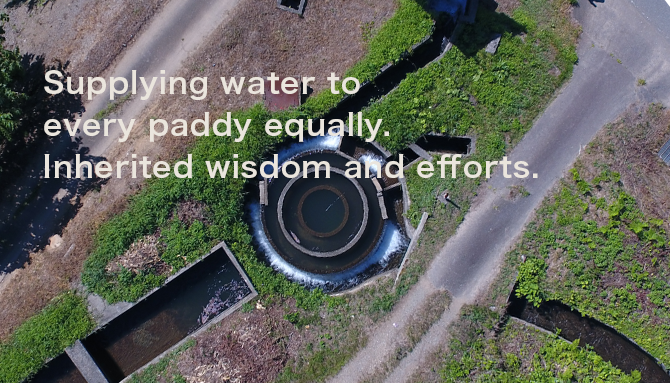 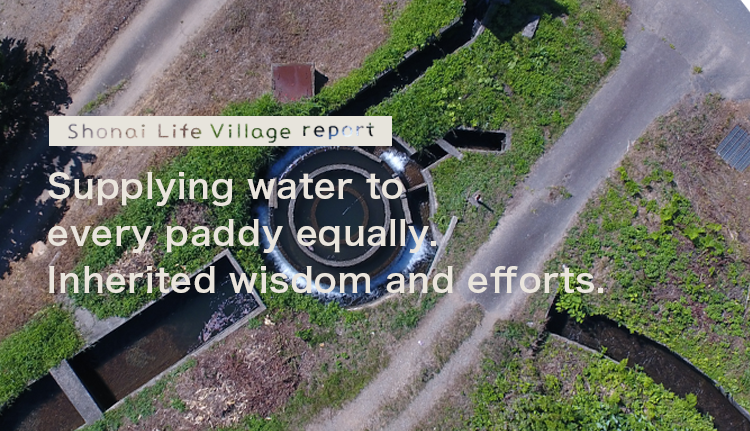 Water, which is beneficial to our lives, can also threaten us through acts of Mother Nature. In this report, through the study of how our forefathers accomplished improving irrigation for paddy fields, you will find their timeless message benefits today’s farmers.

In the summer, vast tracts of green, made by many ears of rice, represent Shonai as a paddy region. When passing along the footpaths between rice fields, and hearing the croaking of frogs, upon their silencing, we then notice the sound of flowing water. This is irrigation water in use. Although facing roadways, most drivers never notice this, as there is an embankment at a position higher than the line of sight. This is how it is at Temisawa Cylindrical Tank Diverter, located in Taranokidai, the city of Tsuruoka.

According to Mr. Masahide Sasaki, from Shonaiakagawa Land Improvement District, which regulates water utilization for the lower reaches of the Akagawa River, Temisawa Cylindrical Tank Diverter was built in the 1950’s. “Along with legal reforms, irrigation associations were merged and became a unified organization. River management as a flood-control measure used to be one of our missions. Nowadays, with the improvement of safety from dam construction, our mission has shifted from flood control to irrigation. We manage water from the Tamugi, Tazawa, Bonji and Akagawa Rivers, which originates from Mt. Gassan, under the request of the government. Water diversion works as a device to maintain water in irrigation canals from these rivers, and distribute it to each paddy field equally,” said Mr. Sasaki.

In Shonai, damming up rivers, laying irrigation canals to the plains, dividing and diverting water to paddy fields all benefit not only the paddies, but also the human diet. This was the hard-earned outcome of farmers’ prolonged trials and efforts. “Each irrigation canal and water diversion are still maintained by local farmers. Compared to other regions, we have had fewer conflicts over water supply, as Shonai retains a sufficient amount of meltwater. Also, there is a spirit of sharing of natural resources that clearly remains in peoples’ minds,” Mr. Sasaki explained.