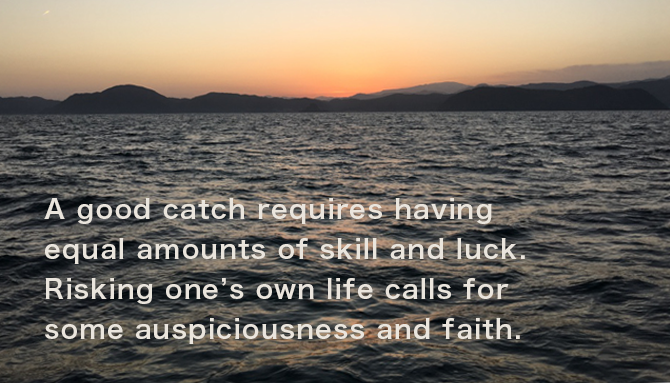 Shonai Life Village Report, Vol. 5, which highlights the Shonai region through water. This 5th episode’s theme is the sea; a fisherman’s everyday life, commercial vessels that brought products from various regions to Shonai, and the guardian of the sea, all of which illustrate the difference in the values between people making a living off the land vs. the sea. Both confront the usage of water. In covering both the past and the present, we’ll highlight some differences special to Shonai.

Weather lore, it is heaped with intuition in hope of better dealing with nature.

6:30am, at the touch of dawn, when the mountain ridge reflects the pale orange sunlight, from a bucket a man slowly starts hooking sardines to a long line and rhythmically throws them into the ocean. The line has sardines as bait at 1m intervals stretching to as long as 1km in entirety. This is longline fishing for highly valued fish, Spanish mackerel. As a fisherman, Mr. Hiroaki Ishizuka, aka Yusei, has already been on the ocean for 40 years. He is a guy who risks his own life and has faced the ocean for a long time.

“I went fishing only twice this month due to recent bad weather, but I think we have good “aya” today,” Mr. Yusei said with a Shonai dialect. Aya can be described as auspiciousness. Because of dealing with unpredictable acts of nature for so long, there is an auspiciousness he must believe in and depend on. Though today likely seems to be the best of conditions in a long time, Mr. Yusei mutters, “Good for you, we’ll be done early today.” Both the sea and wind are calm, and the sky is clear. To untrained eyes, the day looks perfect for a good catch. But as it turns out, the result will be the complete opposite. Mr. Yusei points at the distant view of Mt. Chokaizan and says, “You see that fog over there. The weather will be stormy.” So, his earlier words, “Good for you”, was him just being witty. “Weather lore. We predict the weather by looking at the sky and feeling the temperature and humidity.” So later, we’ll see that his prediction hits the mark.

In the afternoon we receive a radio message from another boat, “A white rabbit is about to jump.” They describe the white crests of waves as “jumping white rabbits”. This exchanged message also signifies the tightly bonded relationships of fishermen as they risk their lives on at sea. Soon after, the wind blows very hard and it becomes stormy with us barely able to stand up. Due to the difference in the height of the waves, the entire boat rises up, lifting it to a height of 2m, then it falls yet another 2m with the seawater coming over the bow. We ask Mr. Yusei, who is calmly peering at the waves, “Aren’t you scared?” He immediately answers with a serious look, “I’m scared. This is no picnic.”